BigTreeTech sent me their motherboard replacement for the Creality CR-6 SE together with their BTT touch screen featured earlier in the BIQU B1 and available as an upgrade for many other 3D printers. The Creality CR-6 SE features a motherboard that has not been without its issues - and also my motherboard has failed within 30 days after using my unit. 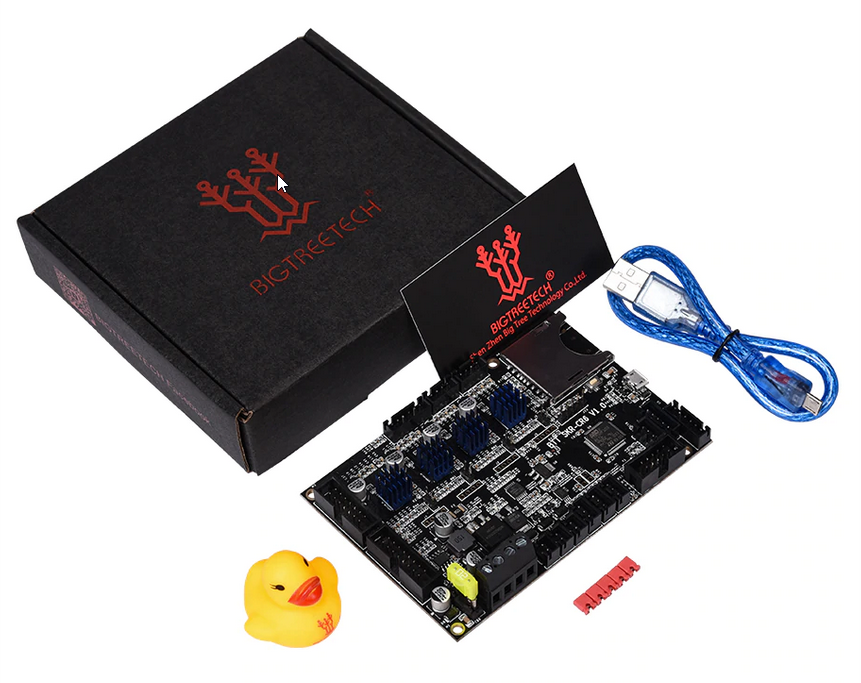 Ensure you no have prior issues

Before you start, you want to make sure your CR-6 is running smoothly. For instance: no extrusion issues, no bed leveling issues, no weird issues with the stepper motors. If you don’t do this and you change the motherboard, it will be harder to diagnose what the cause is.

If your motherboard has an early failure and didn’t get to see the CR-6 in action, you will of course have no choice but to take a leap of faith - though you can do some hardware checks as detailed below.

If you haven’t replaced your power switch yet and you think it might get faulty at some point, replace it.

I strongly recommend to do a hardware check if you had a motherboard failure earlier and you have purchased a BTT board to replace your stock motherboard. The pinouts can be found further below in this article.

With your multimeter in resistance mode:

With your multimeter in voltage mode:

For this operation you need the following tools:

Optional if you have a BTT touch screen:

The BTT SKR board comes preloaded with firmware configured for the CR-6 SE native touch screen, yet it is a good idea to update to the latest version of the official firmware because the boards are new.

From version 5 beta onwards the community firmware is available for the BTT SKR board, but BTT provides also provides official firmware and source code of their own on their BTT-SKR-CR6 repository on Github. This firmware is based on the Creality 1.0.3.x firmware. As of now this repository is updated weekly, so if you run into issues, there is a good chance things have been fixed there.

The firmware you’Il download as instructed below needs to be put as firmware.bin on the flash drive. Anything else will not work.

When you have eventually flashed the firmware, you’Il find that the file has been renamed to FIRMWARE.CUR

Make sure that you safely unmount the SD card from your computer after you’ve put the firmware on it.

Read on the instructions below on which firmware to use.

You have not purchased the BTT SKR touch screen

The touch screen is very picky when it comes to accepting firmware updates from an SD card. You need a FAT32 formatted SD card with a 4096 cluster size. Anything else will not work.

The video below will show the general process of updating the LCD firmware.

You have purchased the BTT SKR touch screen

If you have purchased the BTT SKR touch screen you can leave the firmware on the CR-6 touch screen as is. You still may want to flash it to the stock firmware, just in case (check for instructions above).

Download the firmware.bin file from their Github page and put it on the SD card as firmware.bin in the root folder of your SD card.

Prepare the printer for the task. Disconnect the printer from the mains voltage, even if you have switch turned off. You don’t want to risk powering it up while you are still mounting the motherboard.

The first screw to remove is just below the bed. Remove this one before continuing. Also remove the drawer, if you haven’t already. 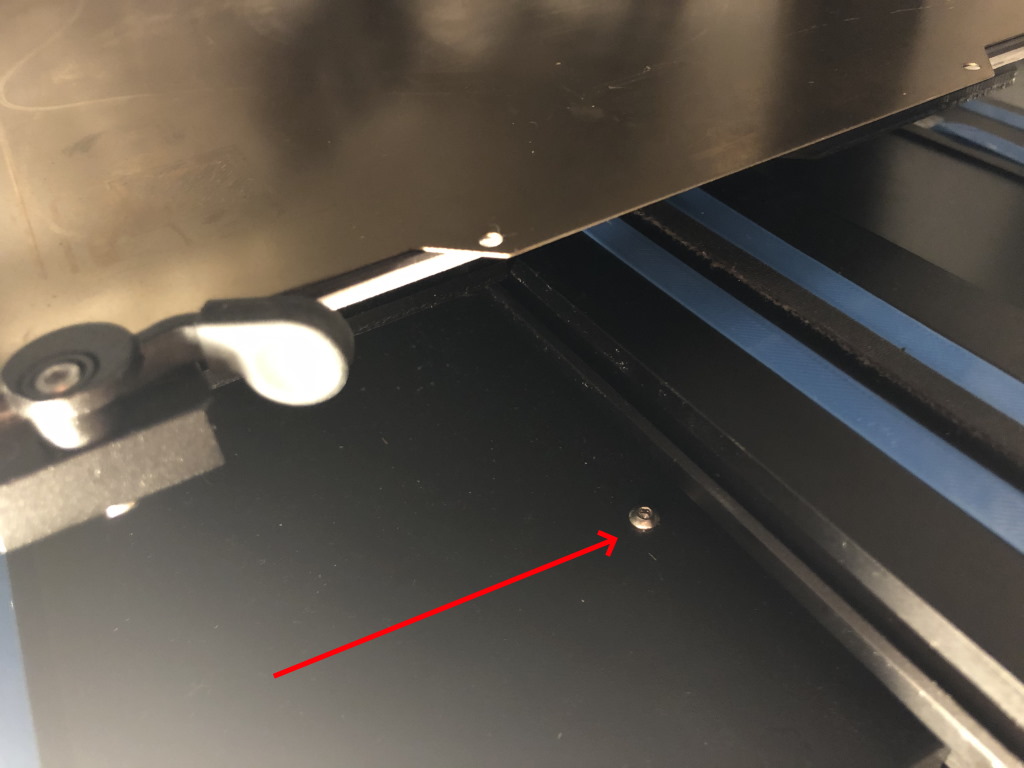 Put the printer on its side or you can tilt it backwards if you can support it against the wall of your enclosure (if you have one).

Now you can remove 3 screws holding the motherboard cover to the printer. This is also a good moment to take a picture of your current set-up. Make sure all the wiring is visible in your picture so you can reference it later on.

Creality has glued all the connections to the motherboard. You need to carefully remove the glue from the connectors using some pliers. 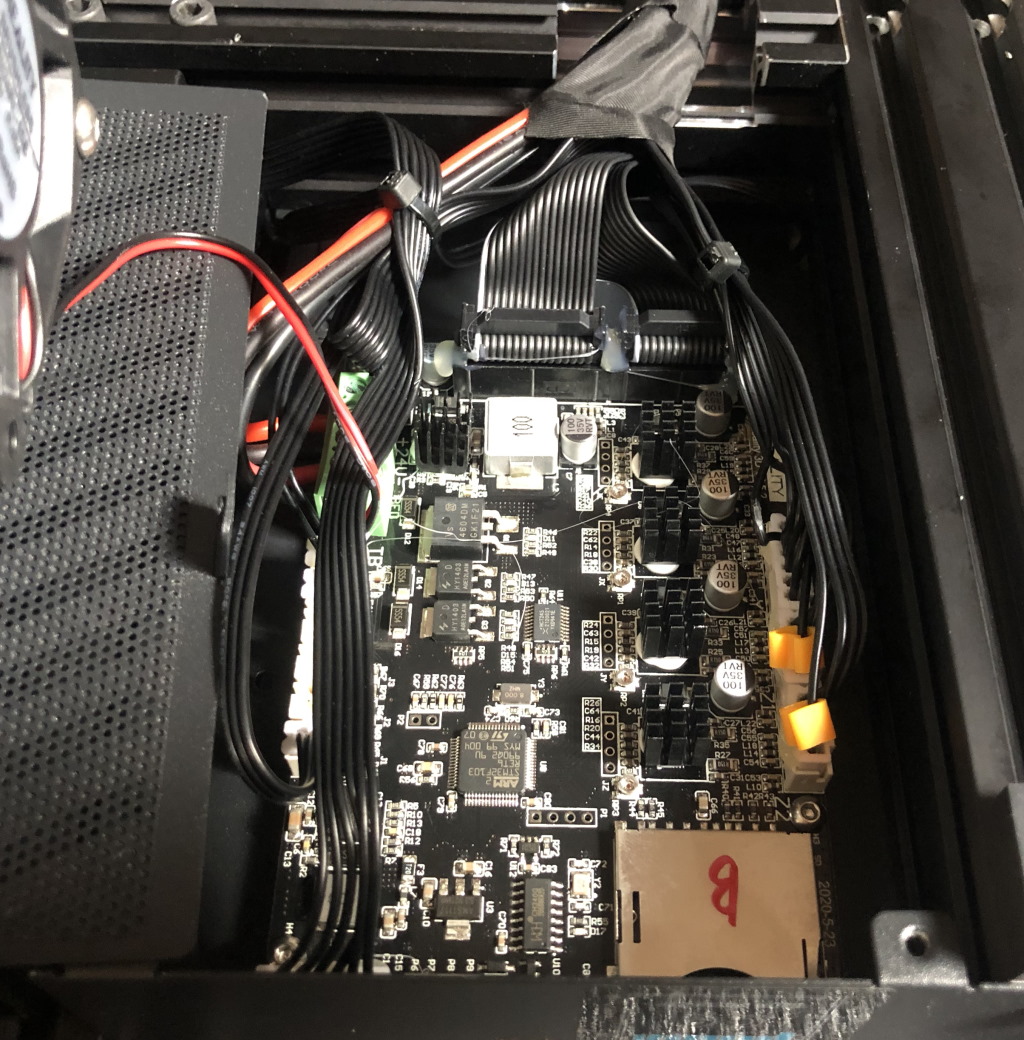 You can gently pull on the glue with pliers, it should come loose fairly easily

Then you will want to label which two wires go to the heated bed, and which two wires come from the power supply. Just mark them with a permanent marker or a bit of tape. You don’t want to mix them up when you install the SKR board. If you later lose track of which wire is which: the wire to the heated bed measures 2 to 3 Ohms on the multimeter and the wires to the power supply measure as an open circuit. 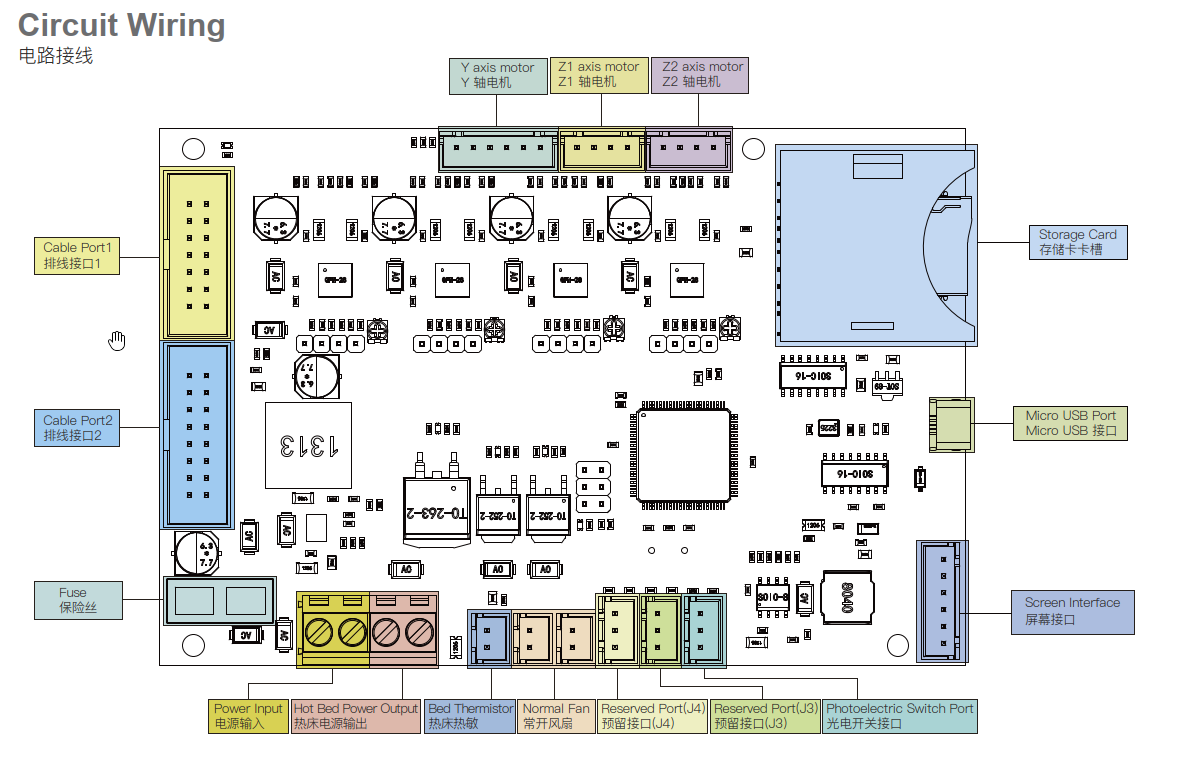 The schematic of the Creality CR-6 SE motherboard, which I took from the user manual

Except for the thick 24V wires, all other cables have keyed connectors so you can’t reconnect them wrong. The Z-axis stepper motor connectors are interchangeable because the stepper motors are driven from a single stepper driver.

Once you got all the cables unplugged, unscrew all the small screws that hold the motherboard in place with your Allen key. Be careful! The screws are not magnetic and will get lost if you are not careful!

Now you got all the wires disconnected, you may want to un-tin the wires as demonstrated in the TH3D CR-6 live stream:

This is to prevent potential issues with the screw terminals getting too hot. Take it at TH3D’s advice, and at your own risk.

If you have not purchased the BTT touch screen, you can skip this step Otherwise, you’Il want to do this step to make sure the cabling is routed nicely.

If you remove the drawer from the printer you can pull the “tray” the drawer slides in forward, a bit. It takes a good tug because it friction mounted to the frame. You can’t get the tray forward enough to remove it off the printer, but enough so you can remove the CR-6 DWIN touch screen cable that is routed behind it. 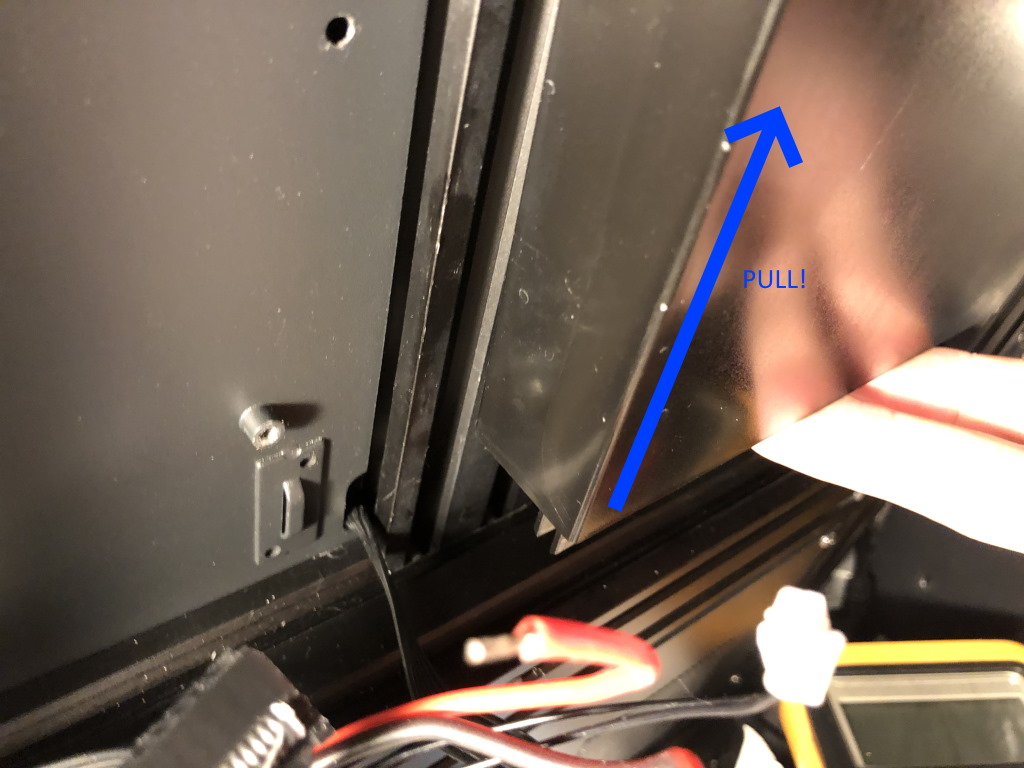 Give it a tug, it will come loose

You need to wire the touch screen using two cables: 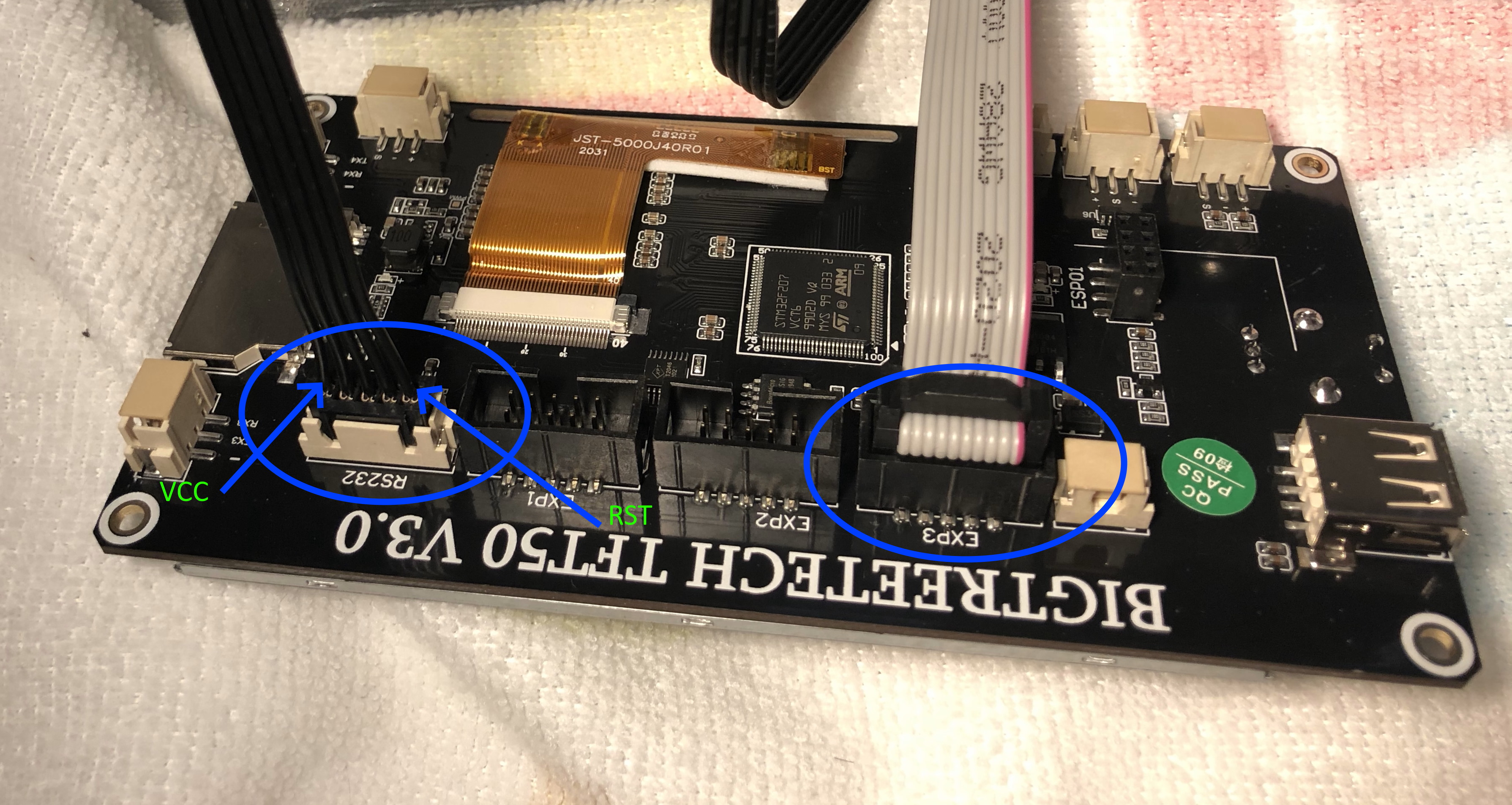 If your cables can’t reach the position to mount the touch screen at the right side of the printer, you will need to mount it on the left side. Temporarily you can route the cables through the motherboard cover (you need to screw the cover on loosely so you don’t pinch the cables). 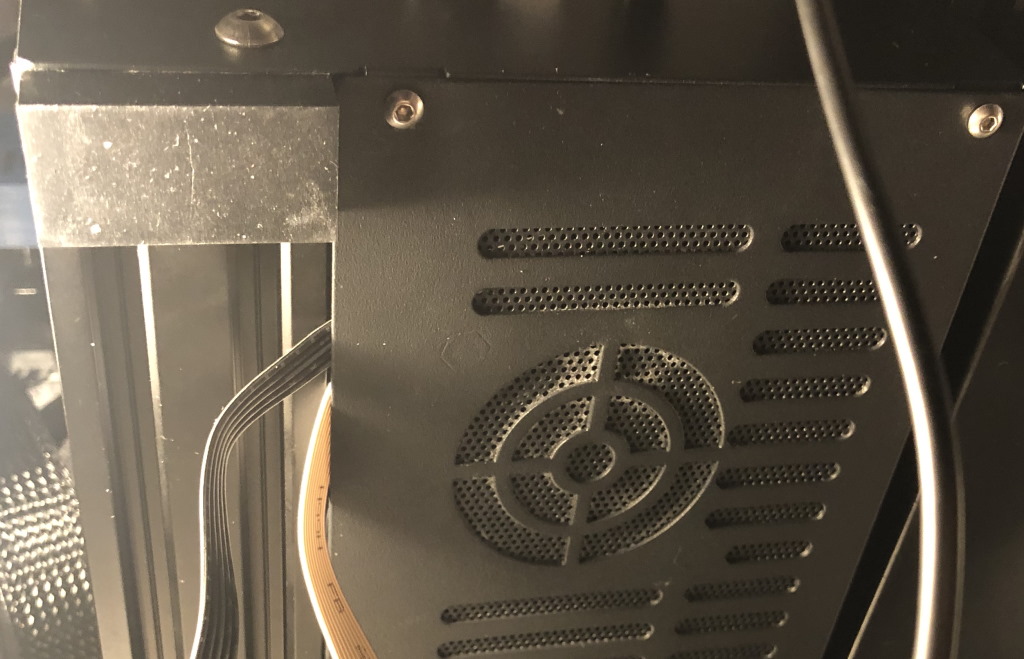 Be careful not to pinch the cabling - screw the cover on loose. I would recommend printing a new cover or some spacers for a more permanent solution.

The motherboard can be mounted using the small screws the original motherboard was mounted with. Do not overtighten the screws, because that will ruin the PCB. 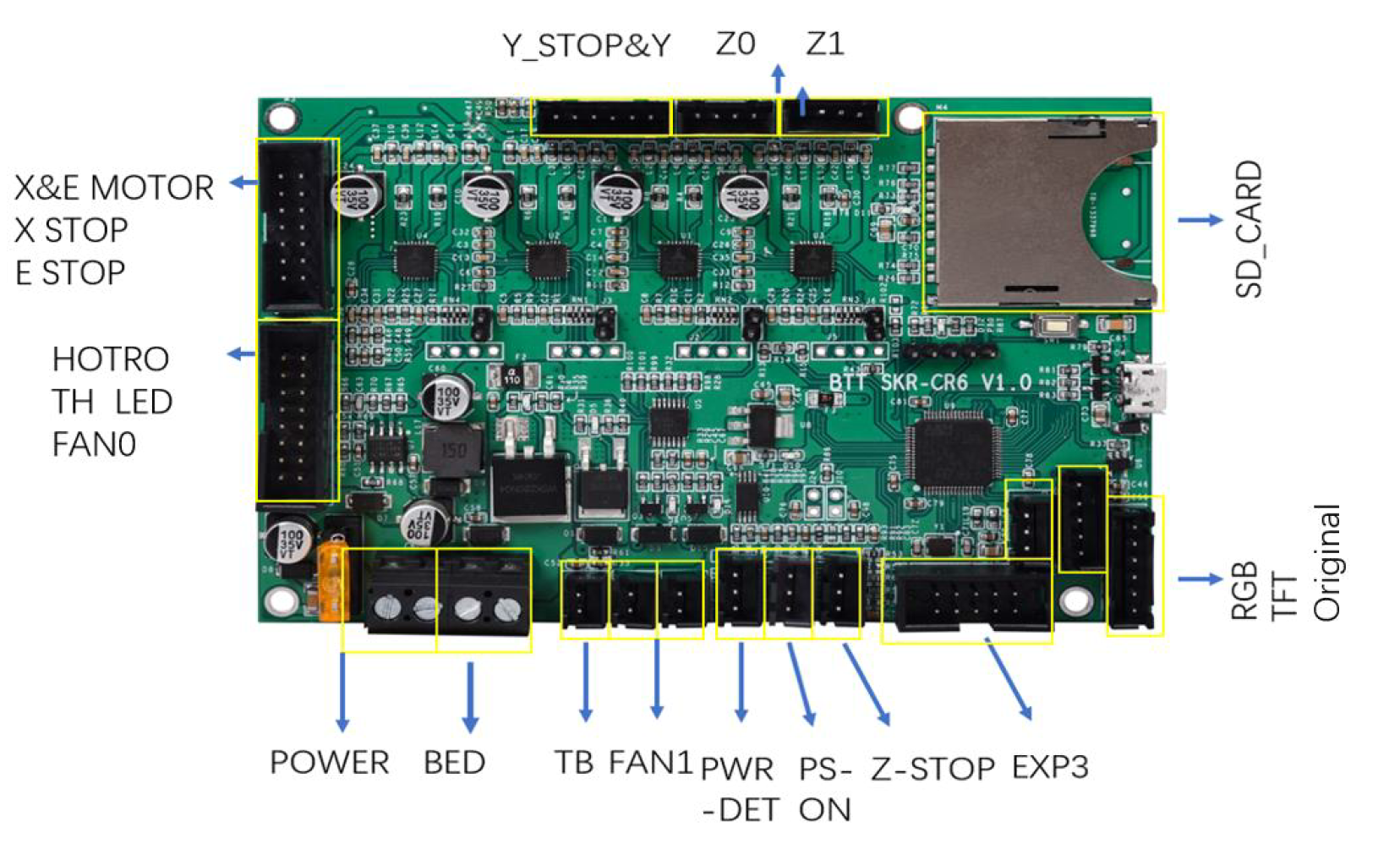 I also recommend you have the BTT board pin-out PDF handy. 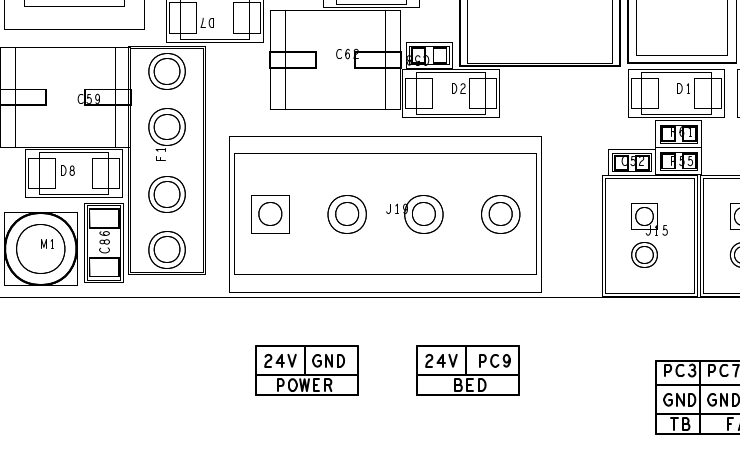 Don’t mix up the wires for the bed heating and the input of the power supply. Although this board does not come with the MagicSmoke® feature, it might spontaneously develop such feature if you wire it wrong. Better check it 10 times, than regretting it one time. 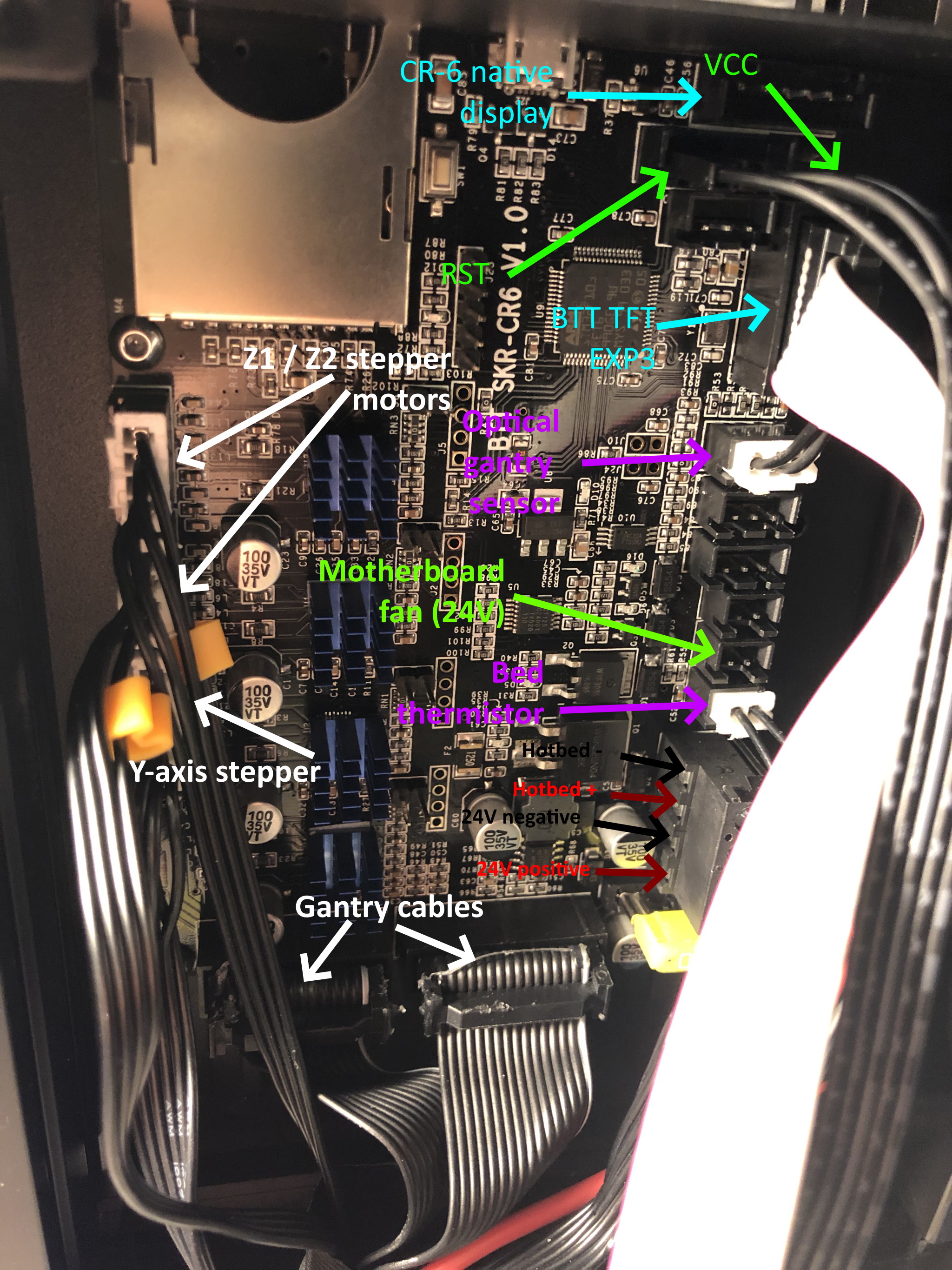 Basic overview of the wiring, take extra care with the wiring of the SKR RS232 cable because this cable is not keyed and can be connected wrong

Plug in the cabling:

BTT also delivers some jumpers, you would use these for sensorless homing. Because the CR-6 SE has endstop switches, you would not connect these jumpers. 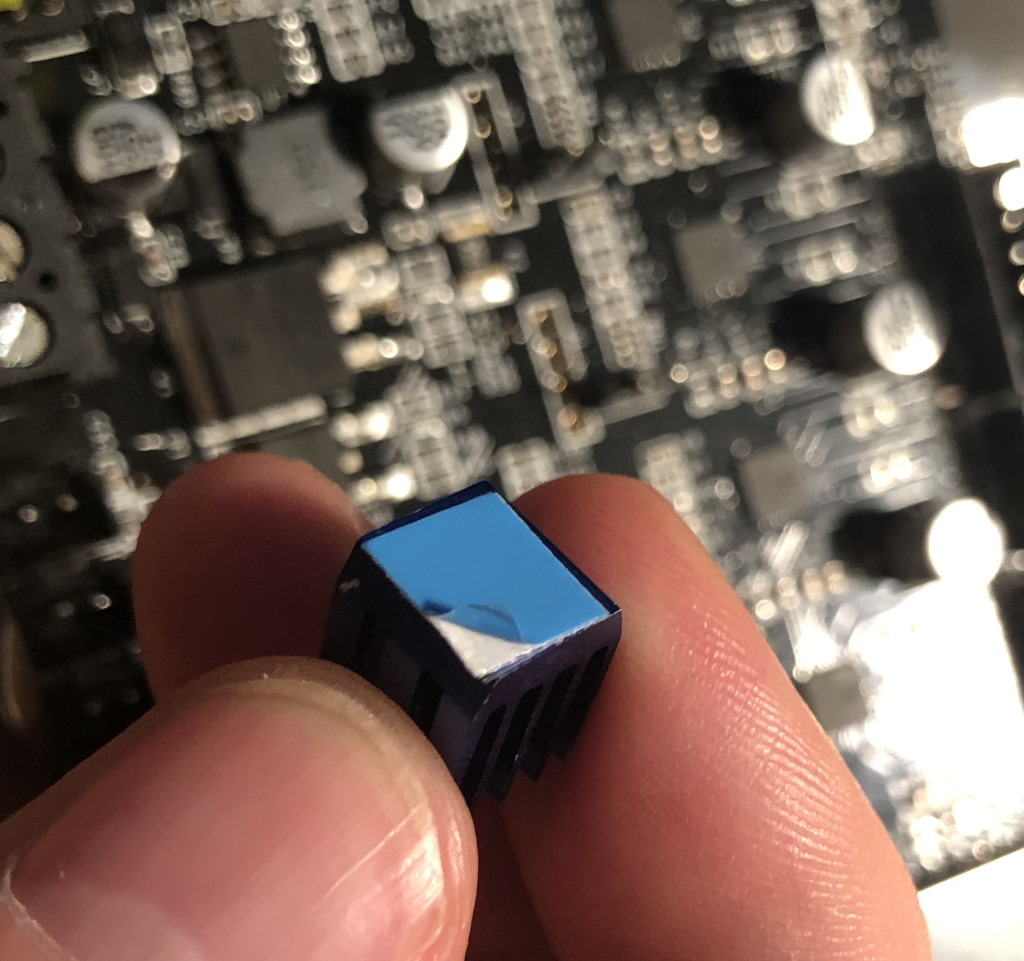 The stickers for the heat-sinks are already attached and the sticky layer is protected. Pull the protective blue cover off with tweezers.

You can just stick the heat-sinks to the drivers. 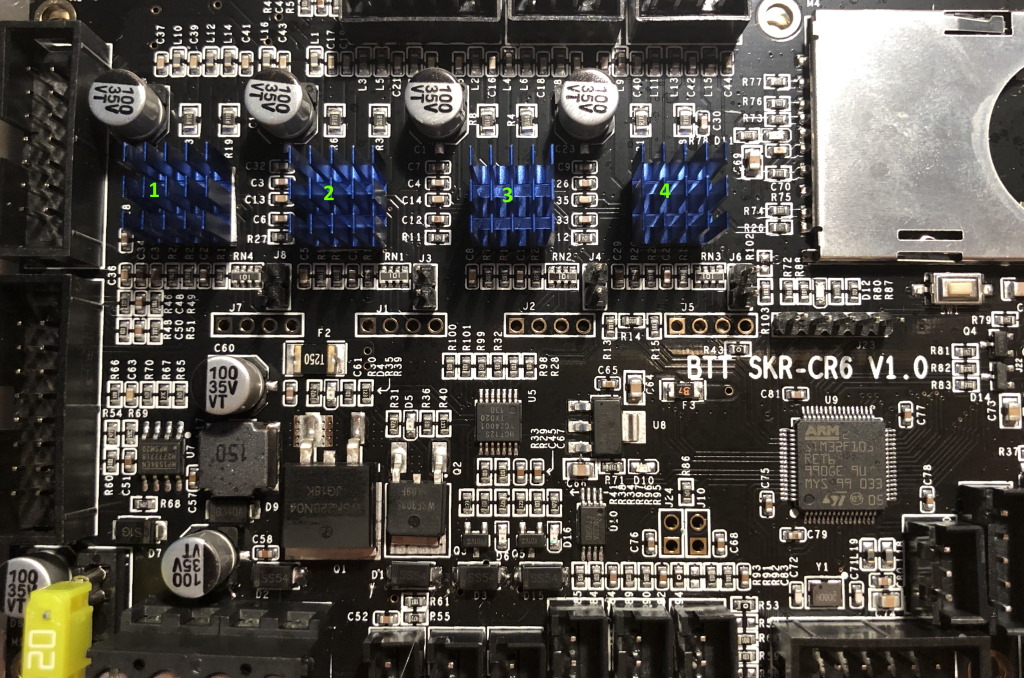 There are four heat sinks. Mount them so the small fins of the heatsinks point to the long side of the motherboard.

Prepare for powering on

Do a final wiring check before assembling the motherboard cover. Make sure the connections are well seated in the connectors, and the 24V screw terminals are properly connected.

You also want to raise the X-axis to about half of the total Z-height of the printer. Put the hot-end in the middle of X axis, and put the bed in the center of the printer. This will make sure that we have sufficient time to act if homing would fail for some reason.

Once you’re done, put in the SD card with the firmware file and turn the printer on. The printer will take a moment to flash the firmware. On BTT boards, the firmware.bin file will be renamed to firmware.CUR after flashing has succeeded. In addition the blue LED on the hot-end will flash while the firmware is being flashed.

There are some basic checks you can already perform once the printer is ready:

If these checks are OK, you can continue and home the printer. Have your hand ready near the power switch to turn the printer off if necessary.

If you want you can simulate homing by blocking the optical sensor and pressing on the nozzle while the Z-axis is being homed (so when the X-axis moves down).

Once you’ve homed the printer you are ready to go.

Next steps (for all configurations)

Next you will want to:

You also may want to do a PID autotune if you find that the printer is having difficulty to maintain temperature.

Next steps (when using the BTT Touch Screen)

If you have the BTT touch screen, you may want to download and install the BigTreeTech Cura plugin so that 3d model previews become available for your sliced gcode.

There are several mounts already available:

There is also a CR-6 collection available on Thingiverse.

Until you have printed something: be careful.

There are some known issues with this BTT board:

I hope this guide has helped you install the Big Tree Tech SKR motherboard on your CR-6. If you have any suggestions or remarks, please let me know.

If you like to give me a cup of coffee for all these sleepless nights, please check this link. I appreciate it! 😄