Those who know me a bit know that I love to play with Arduinos and I like make hardware alive by programming. I actually made a “kids do box” for my three kids. It was made of wood, and I’m not very experienced with wood working - so this box is a bit rough. For more advanced designs I don’t have the tools and skills to make it a reality. So, after seeing the Creality CR-6 SE review video on Tweakers.net and many more favorable reviews I decided to take the plunge and dive into the world of 3d printing!

The printers I will receive are the Creality CR-6 SE - but as a total surprise also the the BIQU B1 from BigTreeTech! More on that later!

The Creality CR-6 SE is one of the newest 3D printers developed by Creality. It launched at as a Kickstarter campaign in 6 May 2020 and funded over 3 million US dollars when campaign was funded in 5 June 2020. 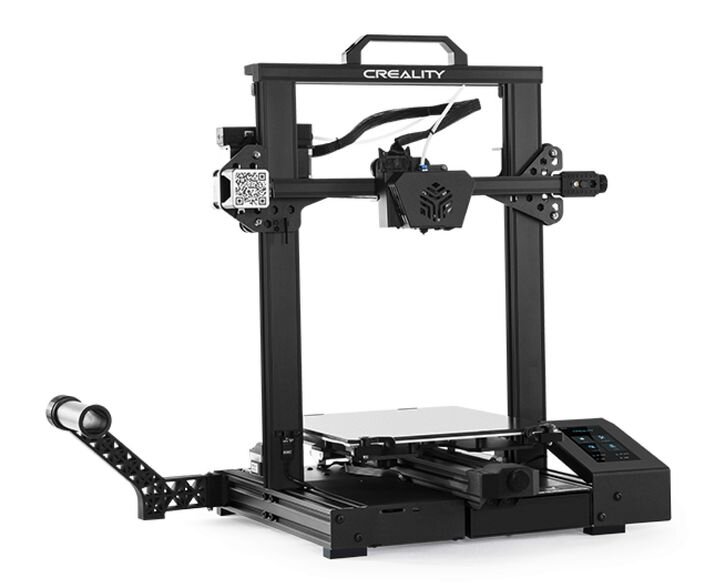 Regarding Creality using Kickstarter and having so many almost-close-to-production quality review models available, one might ask why they did a Kickstarter. Honestly, I think this was just a fancy pre-order marketing campaign molded into a Kickstarter campaign. It is not exactly what Kickstarter is meant for, but I doubt Kickstarter would care because they do get a 5% cut of the campaign funding.

Kickstarter has of course the risk for the backers. You might lose your money or what you get might be broken or unusable. However, because of the big multi-million company that Creality is, and their promises on warranty (1 year) I thought this would be alright.

This campaign is not finished yet, I don’t have my printer shipped yet, but what a ride it has been so far!

There were multiple tiers: a tier for September delivery and a tier for August delivery. I have waited long before backing the Kickstarter so by the time I backed the project the August tier was long gone.

Shortly before completion of funding the August tier became available - there are always backers who pull back their funding - so I switched to the August tier. This cost me 20 HK$ but since I expected my printer to receive while I were off from work that was worth it!

The ugly came shortly after the project was funded. Creality decided to change the shipping. Instead of shipping by tier, then backer number like promised - they changed shipping to top countries of backers. This meant in practice that the USA was going to get their printers first - followed by the UK, Canada and Europe. This was very disappointing - the tiers of the campaign were useless and my 20 HK$ was vapourized.

That I was going to be receiving my printer during my holiday break was now hopeless. Fortunately I had a few spare days in September. The concert where I was going to was cancelled due to COVID, but I kept my spare days.

Regular shipping goes via a railroad or via a slow container boat. Either way it takes between 30 and 45 days for the delivery to be completed.

Shortly after the first shipment it became clear that shipping actually went via the slow boat. Whether this was because additional money needed to be paid, or shipping was done through a company called “Express” and it was all lost in translation is not clear - but no backer has understood this decision.

Before and shortly after funding Creality was quite responsive. They answered questions in the comments and everything was going alright. They offered add-ons, which were both spare parts and actual additions.

The bad came later - Creality used Pledgebox for managing and selection of the add-ons. The survey didn’t contain one of the add-ons though (Capricorn tubing), and when it later did contain it, it was called “Genuine teflon tube”. Although I wasn’t affected, later on some orders were spontaneously changed to a larger CR-6 MAX printer.

The ugly came when shipping of the first countries appeared to be completed - some backers did not get their printers shipped. We found out later - and I say “found out” because Creality became less and less forthcoming - that orders with add-ons were going to be shipped later.

It was now completely hopeless that I was going to receive my printer by the end of September, so I could play with it when I had a few days off.

When the orders without add-ons were shipped, they didn’t get shipped entirely. Apparently, at the 20th and 21 of August several batches with add-ons had gone out. Even more surprising, those backers received their printers a few days later - without any add-ons! This time, add-ons were now going to be shipped seperately. But if that is the case, why the delay at all?

By the end of August the first printers started arriving at US backers. It became pretty clear it was not smooth sailing for everyone. Some things were seriously worrying.

Some reports came in over time:

Support does not support

If you do run into issues, the most hard thing is to come into contact with Creality. During the Kickstarter period they have communicated several e-mail addresses!

We’ve seen at least (I’m leaving out the TLD intentionally):

The ugly is that they do not respond well. You need to send several e-mails and it is very difficult to get them to respond. The time necessary to resolve an issue is long.

All with all the situation regarding shipping and production has been quite bad - some might call it terrible. That is not the worst of it though. During the campaign someone found out that Creality was selling the CR-6 SE through their official store on AliExpress. 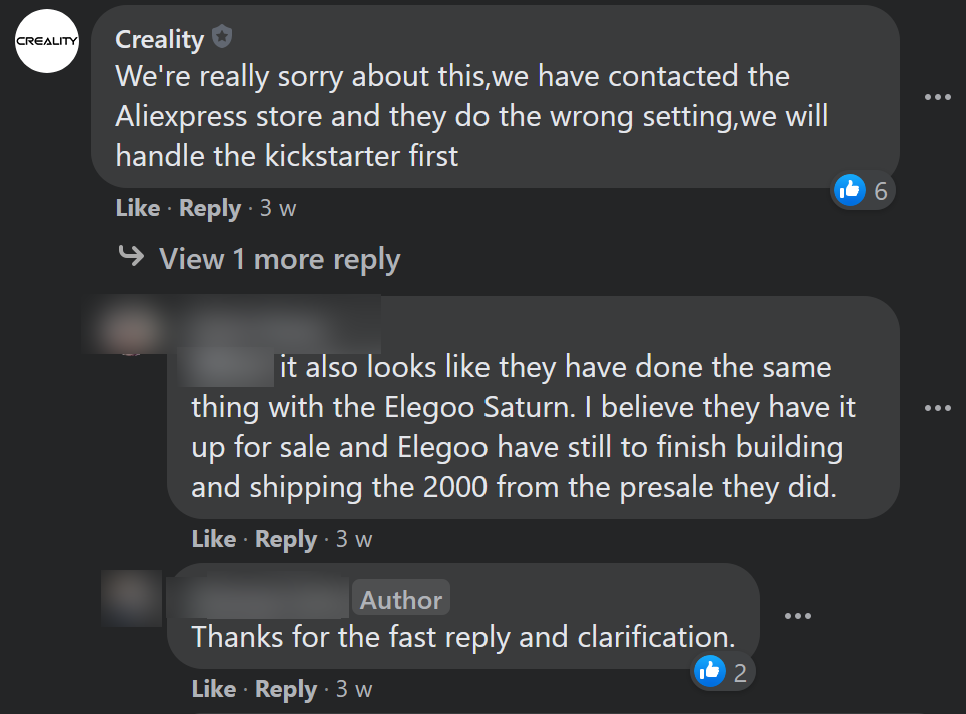 This caused quite a stir and Creality responded, attributing it to a “bad setting”. Fine - that can happen, but was that really the case? Not very much later backers found out that the printer was being sold on Banggood and Sainsmart - two other resellers. Pretty soon after the AliExpress store was also opened again.

Besides this, backers also found out that the printer was already being sold to at least two people. This happened just after the campaign was finished, through direct selling by Creality. The first shipment from Kickstarter wasn’t even a fact at that time!

In addition, Creality has been holding giveaways involving the CR-6 SE, discounts and combination deals by which you could get a Creality wifi box for free by buying the CR-6 SE. The current retail price of the CR-6 SE is very similar to the Kickstarter price which makes the Kickstarter price, given all the risk and terrible way this campaign has gone not a good deal. At least when you go through a reseller, you can deal with the reseller and not with Creality.

Not all is bad

Still, with the bad communication of Creality, even worse after-sales support and issues with mains voltage are very worrying. Even more so because the failing switch is wired wrong because the neutral wire should hit the switch as well - this isn’t the case with the CR-6 SE. In the Netherlands and some other European countries we have a reversable Schuko plug. This means that there is no guarantee which wire is neutral or live. You could just end up switching the neutral wire, with all consequences.

So, this campaign of Creality has been plagued by bad communication and a lot of bad decisions on the part of Creality. It is very sour to see that printers are being sold without your printer even being shipped.

But… I hope I will get my printer shipped, have little to no issues I cannot resolve myself, and the issues they now know of are ironed out in the production of my unit. I also hope that by the time I receive my printer the firmware is available from the website - including source code!

One of the main competitors of Creality is BigTreeTech. Originally they were a manufacturer of 3D printer upgrades like the SKR mainboards. They have now also produced a 3D printer which is very similar to the Ender 3 V2. 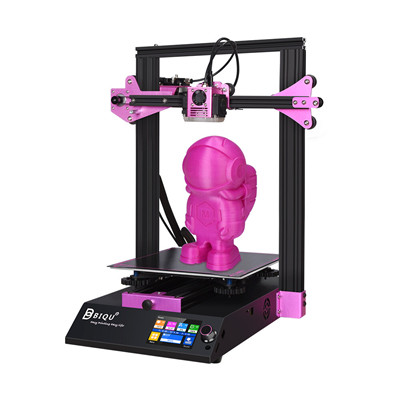 BigTreeTech is sending me the BIQU printer for review, and after review I’m allowed to keep it.

How I was contacted

Pretty soon when the first Creality CR-6 SE units arrived at the US backer it became clear that a lot of the CR-6 units needed quality control before being assembled and turned on.

I’d like to believe this post, later moved to Github, helped a lot of people and it gained a good amount of traction. This must have gained attention of the BigTreeTech company and I was contacted by someone from their side.

They asked whether I wanted to review their 3D printer - the BIQU B1. In exchange I would get this printer for free. This was an offer I could not refuse! Given all the trouble with the Creality CR-6 SE situation already this was quite a consolation!

This printer is now due to arrive next Wednesday, and was shipped Friday (yesterday). Now, that is what I call express shipping!

So, I will blog about my first experiences with the BIQU B1 soon with a more complete review to follow. I can’t wait - and want to thank BIQU sincerly for giving me the chance of reviewing this printer!

As for the CR-6 SE, Creality has said to complete shipping printers mid-September if everything goes right. Hopefully this means this printer will arrive just before the fall holiday at the end of October.